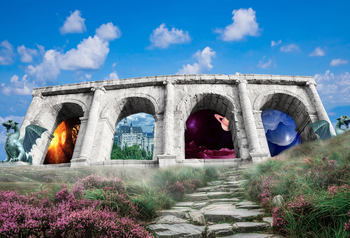 "It's the crossroads of all dimensions, like Grand Central Station for space and time."
— Michael, The Good Place

A world that contains access to many others, most of which are themselves unaware of the existence of portals/other worlds.

Where the Portal Crossroad World is populated and has widespread portal travel, expect the culture to be a strange mishmash of elements from other worlds.

This is a common form of the video game mechanic, Hub Level.