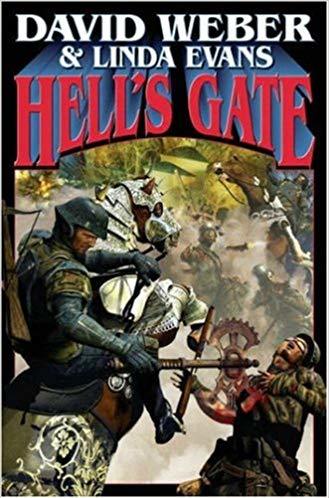 "We did not start this war, but we will finish it. We will take back the portals they've taken from us in their treacherous attack. We will punish the atrocities they have committed against our people. And we will insure that this 'Union of Arcana' will never again pose a threat to us, to our children, or to our grandchildren."
— Zindel chan Calirath
Advertisement:

The Hell's Gate series is from David Weber and Linda Evans, and it is rather hard to describe since it has a tendency to mix up science fiction and fantasy tropes. In the books, the Union of Arcana has expanded through the portals linking parallel universes for over a century and a half. In that time, its soldiers and sorcerers have laid claim to one uninhabited parallel Earth after another, and in the process, the Union has become the most powerful, most wealthy civilization in all of human history.

Then everything changes when Arcanan scouts discover a new portal and make a terrifying discovery: Arcana is not the only world that humans evolved on. There is another human civilization out there, Sharona, that has also discovered the portals and has been colonizing the multiverse. Sadly, first contact goes poorly, and the actions of a few panicky individuals result in a bloody massacre of the Sharonan survey team by the Arcanan soldiers.

And Sharona is different from Arcana, for it possesses powerful and terrifying weapons that the Arcanan wizards cannot explain or duplicate — weapons called rifles, machine guns, mortars and howitzers; all roughly equivalent to late 1800s (note the recent introduction of the spitzer pointed bullet, which happened in 1886 in real life) era tech in Real Life. In addition, many Sharonan citizens possess extraordinary powers of the mind. Sharona is equally horrified by Arcana's magical weapons. Neither side expected this confrontation, and both sides think the other fired first. (Word of God confirms that a third advanced, pure technological civilization will eventually be added to the mix.)

The first two books in the series (along with some of David Weber's other work) can be downloaded, legally and for free, here

(you want the Mission of Honor files for this series). David Weber is working on two more books (the first of which was released in March 2016), with Joelle Presby replacing Linda Evans.