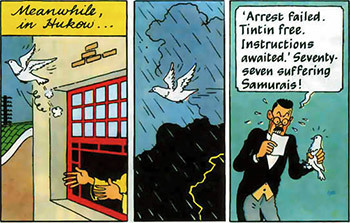 The prototype of Twitter proved to be quite reliable.
Katara: Sokka, tell me you didn't buy a bird.
Sokka: Not just a bird. A messenger bird! Now we can send messages all over the world, even to Gran-Gran.
Aang: Wow, how does it work?
Sokka: Hm, uh, I never actually thought about that. Hawky: Gran-Gran, South Pole. (he points helpfully; Hawky shakes his head in confusion) I think he gets it.
— Avatar: The Last Airbender, "The Runaway"
Advertisement:

was the only way to deliver messages relatively quickly over great distances. A message written on light paper could be inserted into a tube attached to the homing pigeon's

leg, and it would carry it over a thousand kilometers and several days to its destination.

As useful as pigeon post proved to be during the siege of Paris in the Franco-Prussian War, this method of communication possessed some considerable drawbacks. Firstly and most importantly, pigeon post is only a one-way communication device. A homing pigeon's capacity to reliably deliver messages was entirely dependent upon its ability to locate its nest and mate. Thus, the pigeons had to first be transported from their nesting location to the senders' location via slower-than-pigeon transit. Once released, the bird would fly straight to its home and not budge thereafter; for mutual conversation, both parties needed either several pigeons transported in the other's location to send home or some means of retrieving them after sending a message.note Sometimes a pigeon could be trained to go back and forth between two locations, one counting as "home" and the other being a major food source, but moving on. Homing pigeons were also prone to getting lost or eaten by predators during particularly difficult journeys, which necessitated sending the same message with several pigeons, some or all of which could fall into the hands of a third party. Indeed, the Germans even trained falcons to do specifically this during the aforementioned siege.

In fiction, the delivery time is considerably shorter and pigeons always get the messages through. Unless you're the sort of person that wants a whole section on pigeons and having the plot grind to a halt if one dies, no-one likes the realistic version.

This trope gets its name from the concept of Instant Messaging

in computing. Considering that you don't even need a computer for this to work, it's no wonder the Medieval Stasis is still in effect. For another example of animals not quite working that way, see Automaton Horses.