Film / A Town of Love and Hope 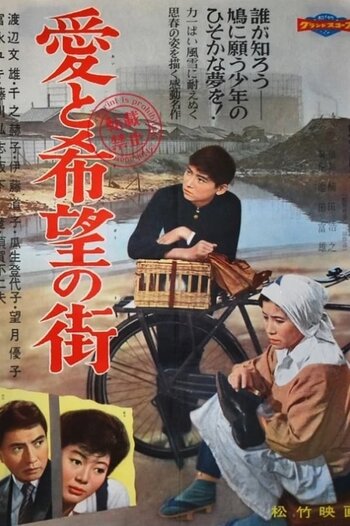 Masao is a teenaged boy who lives with his mother and little sister Yasue, in desperate poverty in a tumbledown shack located in a Tokyo slum. His mom ekes out a meager living shining shoes, except when her poor health (it's not quite an Incurable Cough of Death, but it's implied she's tubercular) prevents her from even doing that. With the family about an inch away from starving, Masao has a side hustle, earning money for food by selling pet pigeons. It's something of a racket: the pigeons have a nest in the slums where Masao lives. Whenever someone carelessly lets a pigeon out, the pigeon flies home to its nest, and Masao sells it again.

Masao attracts the attention of two do-gooder types. His teacher, Miss Akiyama, wants to help him, as does a rich girl named Kyoko who bought one of his pigeons. It so happens that Kyoko's family owns an electronics business, and she tries to get her family to give Masao a job. But when Kyoko and Miss Akiyama find out about Masao's pigeon racket, they don't take it well.