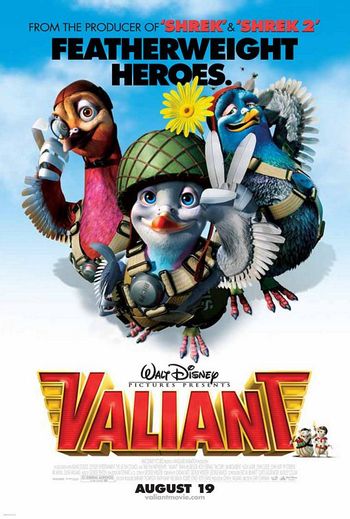 Valiant is a 2005 computer-animated children's film directed by Gary Chapman and produced by John H. Williams, who formerly produced Shrek and Shrek 2. To produce this one, he founded Vanguard Animation, which would later produce Happily N'Ever After and Space Chimps.

It is May 1944, in the midst of World War II. A team of Royal Homing Pigeon Service carrier pigeons, headed by Mercury (John Cleese), are carrying a message of vital importance across the English Channel to Great Britain, when they're suddenly ambushed by German falcon General Von Talon (Tim Curry), and Mercury is taken prisoner and interrogated. Meanwhile, the eponymous Valiant (Ewan McGregor) is a young pigeon of small stature in West Nestington who aspires to be a carrier pigeon himself. Heading to London to sign up, he meets with perpetually filthy pigeon Bugsy (Ricky Gervais), who signs up alongside him to escape the wrath of two thugs. The two go to the training camp and meet three more pigeons; Lofty, Toughwood and Tailfeather, and the five undergo training under the thumb of the aptly named Sergeant Monty (Jim Broadbent). Valiant also falls in love with a nurse (a dove) named Victoria (Olivia Williams). Once training is completed, the five are para-dropped into France on a mission to take a message from Rollo and Charles de Girl, of the French Resistance. When the message is captured by the Falcons, it is vital to rescue it from Von Talon's clutches and get that message back to Britain...

Despite being a CG children's film, which at the time were practically becoming lightning rods for positive reviews, and despite including stellar voice talents, the film became the lowest grossing CG film of all time until beaten by Doogal. It also did poorly with the critics (31% on Rotten Tomatoes), who cited amateurish animation, a by-the-numbers plot, a bland central character and subject matter that would fly over the heads of its intended audience as points of derision.

Not to be confused The Legend of Prince Valiant if such a thing were possible.

Bugsy swindles some crows out of their seeds with the shell game but ends up being found out.

Bugsy swindles some crows out of their seeds with the shell game but ends up being found out.