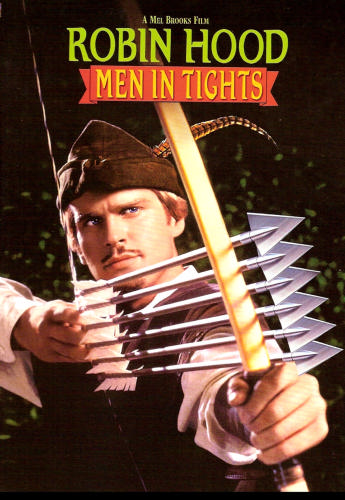 The legend had it coming.
"We're men
We're men in tights,
Always on guard,
Defending the people's rights!"
— The Merry Men
Advertisement:

Really, it was only a matter of time before Mel Brooks turned his sights on the venerable legend of Robin Hood and completely shredded it (again - see When Things Were Rotten). This 1993 anachronistic, irreverent romp through one of the best-known tales of the Western world runs roughshod over classic and modern adaptations alike, aiming most of its quips at Kevin Costner's Prince of Thieves version but also getting in a good many jabs at the classic Errol Flynn The Adventures of Robin Hood, and parodying the archery tournament from the Disney version as well... and unlike some other Robin Hoods, this one has an English accent! (instead of an Australian, Scottish, New Zealand, or American one, that is.)