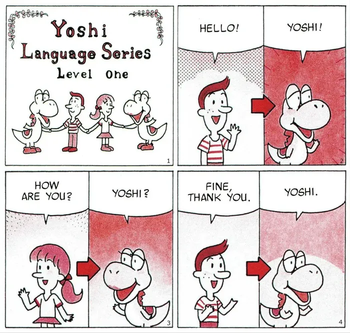 What Friendly Floyd's Yoshi Language Learner lacks in precision, it makes up for in accuracy.
"Well, that's not exactly... what I meant. Is your name all you can say?"
— Ash Ketchum, Pokémon: The Series
Advertisement:

When the Verbal Tic sufferer is pushed well past Smurfing all the way to its logical conclusion and practically becomes The Unintelligible, this is the result, a speech disorder primarily suffered by some types of mons.

The symptom is repeating its own name or a part thereof over and over. It's especially strange when one considers that dogs don't go around saying "Dog! Dog!" et cetera. Sometimes it's part of an attack or an affirmative of their master's commands. Often, it's the only thing the monster ever says, which may require Repeating So the Audience Can Hear.

Can be a Justified Trope if the monsters in question made their sounds before people named them, and people decided to name them that — which happens once in a while in real life. For example, the Chinese word for cat is Mao. In Egyptian, it's called Mau.

Due to the abbreviation of PoKéMoN used in the Pokémon games (PKMN), Leetspeak and UnrEaDaBLe INTerNet wr1tINg are called "Pokémon Speech" in Poland.

Compare with Smurfing, Speaking Simlish, Hulk Speak, Planet of Steves, Speech-Impaired Animal, Verbal Tic Name, A Dog Named "Dog", and Silly Animal Sound. One-Word Vocabulary is the supertrope, for a character that can say only one word, that isn't necessarily their name.