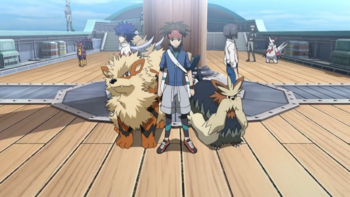 is the unofficial name for an animated trailer meant to advertise the then-upcoming Pokémon Black 2 and White 2. Released in 2012, it's a short trailer featuring scenes from the game.

It starts with the male protagonist Nate and his rival Hugh meeting Bianca to get their starter Pokémon. It then cuts to the female protagonist Rosa battling gym leader Cheren with her Serperior. Some time later, Nate and his Lucario confront Colress, before cutting to Nate and his Embroar challenging Elesa. In the next scene Nate, Hugh, and Cheren battle against New Team Plasma members on a ship. It then cuts again to Nate chasing after the Shadow Triad. The trailer ends with a shot of the logo.

Pokémon Black 2 and White 2: Introduction Movie was very well-received by fans for its accuracy to the games and its stellar animation. This led to a later animated trailer for Pokémon Omega Ruby and Alpha Sapphire. Its positive reception also led to Pokémon Origins and Pokémon Generations, two short animated series also based Truer to the Text. Additionally, its animation and usage of 3D environments instead of Speed Stripes panels for battle backgrounds became the base foundation

for Pokémon the Series: XY.

This trailer provides examples of: