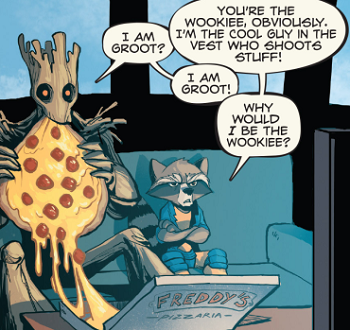 "What, I can't say a full sentence every once in a while?"
— Big McIntosh, Godzilla meets My Little Pony
Advertisement:

The Logical Extreme of Catchphrase. Not only is this word or phrase something that a person habitually says and identifies that person, but that person never says anything else (and may well be unable to).

In short, someone with an extremely limited vocabulary.

A Sub-Trope is Pokémon Speak, where the only thing they can say is their name. See also Welcome to Corneria where NPCs in a video game only ever talk like this.

This does not mean they can't say the phrase with many different tones and intensities, but the words seldom (if ever) vary.

The sports newscaster named Barry is a foam puppet who only yells ''SPORTS!'' (until he gets tired).

Bork Is the Word

The sports newscaster named Barry is a foam puppet who only yells ''SPORTS!'' (until he gets tired).

Bork Is the Word