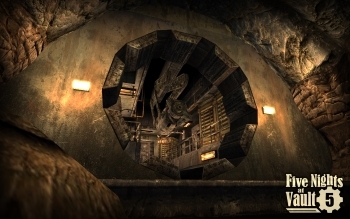 Five Nights at Vault 5 is a fan-made mod for Fallout: New Vegas, based on the Five Nights at Freddy's series. In this mod, you come across an abandoned Vault; a Vault that, as you quickly discover, contains a fully functioning Arena. The Arena's function is simple: it provides a survival training program that requires you to survive being locked inside from midnight to 6 AM, for five nights in a row, with various robots and sources of radiation trying to kill you. Can you make it out of the Arena alive and find out what lies inside the mysterious Reward Room?

As of June 2021 the mod has been taken down by it’s creator, citing dissatisfaction with the final product as to why.