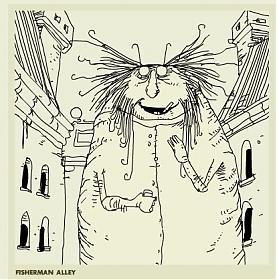 'Sup?
Can you escape the nightmare of a day?
Advertisement:

You are a person. You are in a really weird town. You have to get out of it. And that's pretty much all the information you have.

Daymare Town is a series of point-and-click games developed by Mateusz Skutnik, who is known for Submachine and Covert Front, as a part of Pastel Games. The prominent feature that sets it apart from other point-and-click series is its unique art style. Everything in the games is completely hand-drawn by Skutnik himself. The heavily stylized visuals only add to the bizarre and surreal nature of the games.

The series is known for two things:

So far, there are four main entries in the series, and three side entries. Skutnik has said that the series will continue indefinitely, since there is no real plot to wrap up or end.

Particularly notable in that while it can be a bit scary or creepy, it takes place (obviously) entirely during the day, in a town with functioning shops and houses.