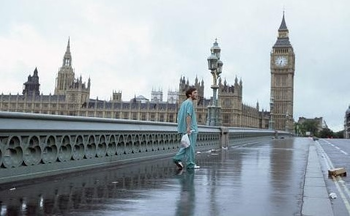 A Ghost City is the larger version of a Ghost Town, and is used in visual media as shorthand for "something terrible has happened". A city typically contains millions of people, and the viewer knows that only the hugest of disasters could completely clear it of its inhabitants.

Always characterized by newspapers lining the streets, shuffled about by the wind (usually with headlines alluding to the disaster), the urban counterpart to a Ghost Town's tumbleweeds. Besides newspapers, other classic signs of abandonment may include blinking yellow light on a crossing, or an arc of sparks from a street light (though their electrification raises Fridge Logic).

Usually there is one person, or possibly a few people, left to contrast the vast emptiness. Often the first indication that this is, in fact, After the End. An Underground City may also be this if it was sunken by an earthquake. May be the first sign of a Ghost Planet.

If such a setting is peaceful and non-threatening, it may be a Beautiful Void but more often than not will invoke Scenery Gorn.