Literature / The Day of the Triffids 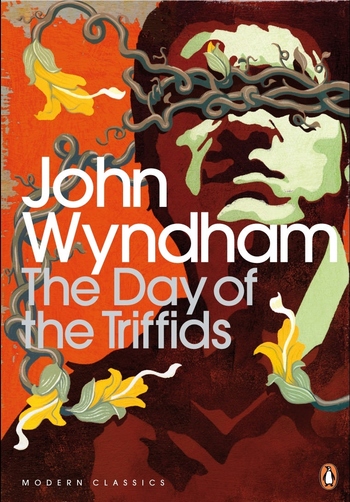 "When a day that you happen to know is Wednesday starts off by sounding like Sunday, there is something seriously wrong somewhere."
—Opening line
Advertisement:

The Day of the Triffids is a 1951 science fiction novel by John Wyndham, arguably the most famous of the British author's so-called "cosy catastrophes".

The book's narrator is an Englishman named Bill Masen, who details how some years previously the eponymous carnivorous plants mysteriously began to appear all over the world, eventually proving to be capable of movement and possessing the ability to attack humans with their poisonous stings; Masen's own theory is that they were deliberately bioengineered in the Soviet Union and then accidentally released into the wild, but the truth is never revealed. Whatever their origin, the plants are also discovered to produce a high-quality vegetable oil, and so an entire industry grows up around farming them. Masen works as a researcher on a Triffid farm, and ends up in the hospital after a Triffid stings him on the face. His eyes thus bandaged, he misses a bizarre meteor shower that lights up the night skies all over the world.

Come morning, Masen learns that the shower has struck blind everyone who viewed it. (He later speculates that the shower was actually a malfunctioning orbital weapons system, but again no proof is to be found one way or the other.) Wandering through a disintegrating London, he meets and quickly falls in love with a sighted novelist named Josella Playton (who missed seeing the "meteor shower" because she was sleeping off an unfortunate party experience.)

While the Triffids rapidly break free of their farms and begin wiping out the blinded population, Masen and Playton become entangled in the squabbles of other sighted survivors leading to their unwilling separation. They are finally reunited at a small estate in the English countryside, taking up farming in a fenced enclave surrounded by hordes of Triffids. When a despotic new government appears on the scene, they join a colony of more freedom-minded individuals on the Isle of Wight, researching for the day they can defeat the Triffids and reclaim the Earth for humanity.

In 2001, the author Simon Clark wrote a sequel to the book entitled The Night of the Triffids, which attempted to be a pastiche of Wyndham's style, and details the adventures of Bill and Josella's son.

The novel has been adapted for film three times, first by a very loosely-adapted 1962 feature film; then by a 1981 BBC miniseries which, while low-budget, is quite faithful to the original work; and once more by the BBC in 2009, again with the plot deviating a great deal from the original.