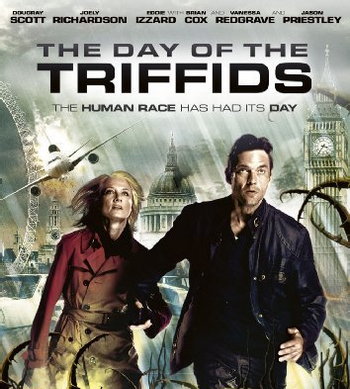 The Day of the Triffids is a 2009 miniseries produced by The BBC, based on the 1951 novel by John Wyndham. The series is the second TV adaptation by the BBC, following a 1981 miniseries.

Bill Masen (Dougray Scott) is a researcher of Triffids, a type of plant life that is carnivorous and intelligent, and are being harnessed by civilization for a rare type of oil that stops global warming. When Bill is attacked by one of the Triffids at a containment site after an activist breaks in, he is partially blinded and sent for surgery. At the same time, a massive solar eruption takes place that blinds everyone who looks at it.

When Bill awakes from surgery, he finds that the world is descending into anarchy. On a commuter plane, the only passenger not affected by the solar flare (Eddie Izzard) survives it crashing and adopts the name "Torrence" for himself, while Radio Britain deejay Jo Playton (Joely Richardson) misses the flare and finds Bill, and they travel together to seek help. At the same time, the Triffids break free from their containment gardens and start ravaging the population.

Bill and Jo, along with fellow sighted survivor Coker (Jason Priestly) begin looking for a way to combat the Triffid outbreak, while Torrence begins to amass power for his own evil means and the Triffids start moving closer to London...

The series was broadcast over two nights, and changed several elements of the films to fit in with modern issues (including the fight against global warming).

As an adaptation of the original novel, many of the tropes on that page still apply. This miniseries also provides examples of: