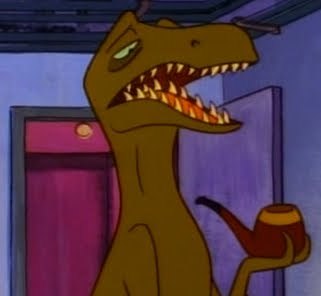 "The other raptors and I have constructed a crude suspension bridge to Venezuela. Once there, I shall lie low and assume odd jobs under the name 'Mr. Pilkington'. But perhaps I've said too much."
[Operations deck is plunged into darkness]
Ripley: They cut the power...
Hudson: What do you mean they cut the power? How can they cut the power, man? They're animals!
— Aliens
Advertisement:

Our heroes are battling the fearsome Monster of the Week. Maybe it's got acid for blood, or More Teeth than the Osmond Family, or can violate the laws of physics with ease. But gradually our heroes realize something even more terrifying. This creature isn't just some mindless predator. In fact, it could be just as smart as they are...

During discussions of this trope, the building

activities of ants may come up.

It can evoke What Measure Is a Non-Human? to the viewers, often involuntarily, whenever the monster turns out to be as intelligent as a human being (i.e. pretty likely sapient). Nevertheless, the existence of this trope can mean that the antagonist had a motivation or goal simple enough to be mistaken for the behavior of a mere animal, so that many of its scenes could be acted by a Non-Malicious Monster without much difference. Until it does something unexpected.

Smarter Than You Look and Obfuscating Stupidity are the human equivalents. Not Even Human is this trope's inverse (a thing that seemed to have intelligence at first is revealed not to). See also dehumanization for when non-human creatures’ ability to think intelligently is dismissed because they are not human. The Non-Malicious Monster is an aversion, a creature that is led by instinct and not any advanced thought.

Compare Monster Is a Mommy, similar in terms of humans underestimating the motives of "monsters". See also Super-Persistent Predator and Suspiciously Stealthy Predator.

open/close all folders
Anime and Manga
Comic Books
Fan Works
Film — Animated
Film — Live-Action
Literature
Live-Action TV
Tabletop Games
Theatre
Video Games
Missile attack on Zeta-5: humans activate first defense successful. Afterwards: danger posed by innovation suddenly clear.
— Usurper Judaa Marr, "Human : Nature"
Web Animation
Webcomics
Web Original
Western Animation
Real Life
By now, we've discovered that most complex life forms have some form of decision-making mechanism and the ability to adapt to their surroundings. Current research focuses on figuring out how and to what extent each species does so. One way to test for self-awareness among animals is to put them in front of a mirror and see if they recognise their own reflection. The way to tell is to put a mark on the animal which they can't see without the mirror; if they see the mark and realise it's on their body, then they can recognise themselves.