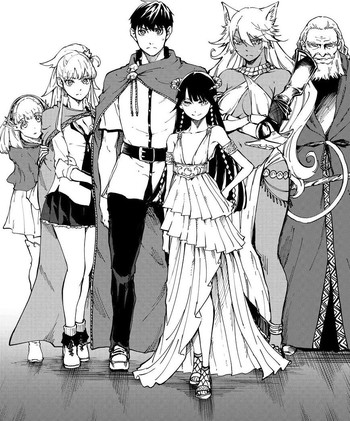 Tales of Wedding Rings (Kekkon Yubiwa Monogatari) is an ongoing high fantasy adventure/romantic comedy manga written and illustrated by Maybe, creator of Dusk Maiden of Amnesia. It started serialization in 2014, and the following year Crunchyroll began publishing it in English online. Yen Press began releasing English print volumes of the series in February 2018.

For almost as long as he can remember, Sato has been in love with his neighbor and best friend Hime. However, one day Hime announces that she is moving and that they may never be able to see each other again. Sato decides to follow her and admit his feelings to her before he loses the chance forever, but finds a strange portal where she was supposed to be. On the other side, he finds Hime about to get married.

And then a demon attacks the wedding.

Hime uses this chance to kiss Sato instead of the prince she'd originally been betrothed to. The wedding ring she gives Sato grants him immense magical power, which he promptly uses to vanquish the attacking monster. Hime and her caretaker then explain that she was actually a princess from a parallel world living on Earth for her own safety. A prophecy states that the man she marries is destined to become the Ring King, a hero who will vanquish the Abyssal King and save the world.

Things will not be so simple for Sato, however, as he currently only has one-fifth of the Ring King's power. The rest of it lies in another four elemental rings, each of which is held by the female heir to the royal families of four nations. For Sato to gain enough power to save the world, he must marry the other four princesses and earn the rings.