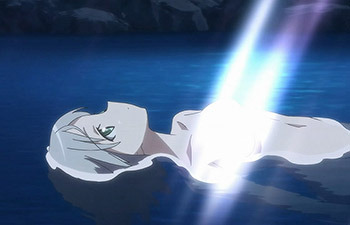 The use of Lens Flares (or perhaps some other stream of light) to hide something from sight. May give the impression that the censored areas are phosphorescent. The trope is fairly prevalent in anime, largely because other mediums make it hard to realistically do this. However, it's not impossible, and it does show up from time to time.

Nothing to see here folks.

Nothing to see here folks.