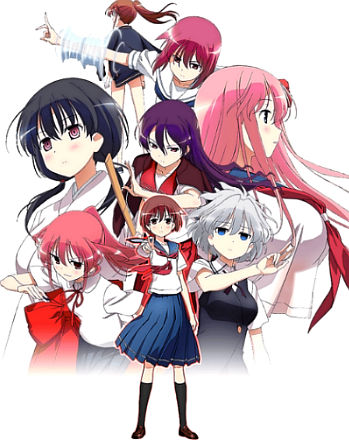 A manga about mahjong.
Advertisement:

If you were looking for the author with the pen name Saki, go here.

Saki Miyanaga is a freshman at Kiyosumi High School in Nagano Prefecture. On the morning of her first day at tenth-grade, while reading a book on the riverbank, she notices a very beautiful girl pass by, and they briefly make eye contact. During lunch that day, Saki sees her middle-school friend Kyoutarou Suga playing mahjong on his phone, and admits that she has played the game before despite her misgivings. Nevertheless, Kyoutarou drags her with him to the Mahjong Club, which is short on members. There Saki meets again the same girl she met at the riverbank earlier, Nodoka Haramura, last year's Inter-Middle High National Mahjong Champion. They play a few rounds and Nodoka wins.

Hisa Takei, Student Council president and club captain, wakes up from her nap just in time to see the last round, only to notice that Saki wasn't playing to win and was just keeping her score even. She also notices that in all of the previous rounds Saki had also scored ±0 — something Hisa attributes to sheer luck, extreme skill, or both.

The next day Hisa bribes Saki into playing again by offering to lend her of books. This time though, Hisa gives her a handicap that makes her start with fewer points than everyone else — to get ±0 from there, Saki is thus forced to play to win. Saki does so, in the process rediscovering her love for the game.

As she eventually confides to Nodoka, her dislike of mahjong (and her ±0 style) stems from years of having to bear with a family who were sore losers and arrogant winners. But with Nodoka's encouragement, Saki vows to join the 71st Inter-High National Mahjong Championship, hoping to one day see again her estranged older sister Teru.

Saki (咲 -Saki-) is an ongoing 2006 manga written and illustrated by Ritz Kobayashi under Square Enix's Young Gangan compilation, based around the game of mahjong, with two anime adaptations by GONZO and Studio Gokumi (the latter as Saki: Zenkoku-hen ["The Nationals"]). The anime has been licensed by Crunchyroll and can be viewed for free on their site

(unless you're in Japan). There is also a live-action adaptation consisting of four episodes and a TV special, plus a follow-up live-action film. Yen Press is releasing the manga digitally in English.

Besides the main manga, Saki also has seven spinoff comics:

Also related to the franchise is a series of one-shot comics, done by Hideki Owada (creator of The Legend of Koizumi and Gundam Sousei), portraying some extremely fictionalized vignettes of series creator Ritz Kobayashi's life, as she tries to track down her deadbeat dad, all the while doing research for the manga she is doing. Both Saya and Aguri join in the fun by the third story.

Note: There is also a character sheet for character-specific tropes.