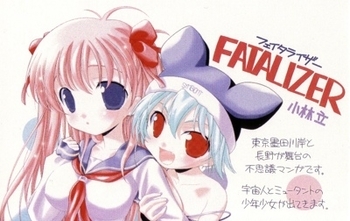 Fatalizer is a manga by Kobayashi Ritz before they drew the mind-bogglingly popular Saki.

In this world, there are people with super powers. They fight each other.

Meanwhile in Japan, a girl named Shiguri 'Sigrid' Aoyama meets a girl named Min Yuri. Sigrid befriends Yuri. Scary people appear and kidnap Yuri. Sigrid vow to save Yuri from those people. Sigrid somehow gains power that put her on the same fighting level as those people. With her new super-powered friends, she storms the hideout of the kidnappers. Turns out that Yuri doesn't even need saving, because she's the most powerful of the supers, and her supposed kidnappers want her to return to the fighting world. Things get complicated.