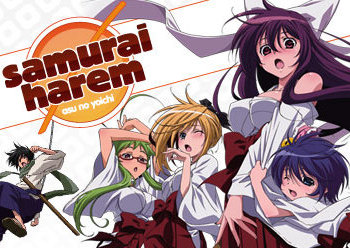 Samurai Harem: Asu no Yoichi (simply Asu no Yoichi or Tomorrow's Yoichi in Japanese) is a shonen manga by Yu Minamoto which ran in Monthly Shonen Champion from 2006 to 2011. The manga was formerly licensed in North America by Tokyopop.

Yoichi Karasuma has spent all his life training in the mountains. Having accomplished all he can in terms of swordplay up there, he moves onto the next phase of his training: to go into the city and stay at the Ikaruga dojo, learning under the teacher there. As Yoichi finds out when he reaches the dojo ( thoughnot before he's arrested for various incriminating accidents), the dojo is run by the four Ikaruga sisters. Who he accidentally ran into during his "crime spree". Yoichi begins attending school in the city and trying his best to fit in while fighters of all sorts begin to arrive either to challenge him or the Ikaruga family.

The manga was adapted into an anime for the winter 2009 season.