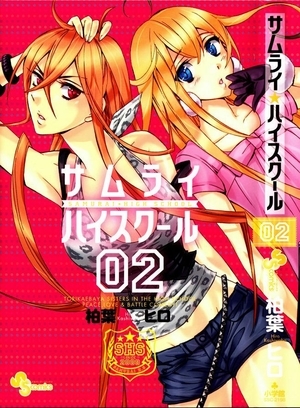 Samurai High School is a manga by Kashiwaba Hiro, which ran in Shonen Sunday Super from 2009 to 2011.

The story focuses on a pair of Half-Identical Twins. Sakakido Kou, the brother, is very feminine, excels at cooking, cleaning, arts and crafts, while Sakakido Tsukiko, the sister, is masculine, loves fighting and is a combat genius. The twins learn about the Samurai High School, where men test their strength and women test their femininity. For the man who stands at the top, he will be appointed Shogun, and for the girl who stands at the top, she will get to choose who she wants to marry. However, since the students are judged by how well they fit their gender roles, the only way they can attend is by swapping places. If they are to be found cheating, they and their family will be exiled to the moon for 500 years.

So get this, Kou is a guy who pretends to be his sister, being named Tsukiko, behaving like a feminine girl, which is his nature. Tsukiko is a girl who pretends to be her brother, being named Kou, behaving like a masculine boy, which is her nature. And then sometimes they aren't swapped (like during the beach episode), but then they have to put on the others personality.

Has nothing to do with the TV series with the same name, not to mention the American anime-inspired comic Ninja High School.