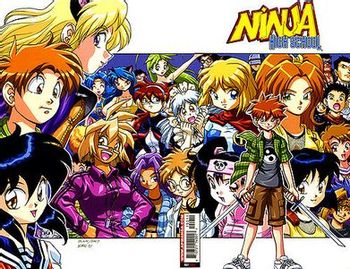 Former cast on the Left (top to bottom): Asrial, Jeremy and Ichikun and the most recent cast on the right
Advertisement:

Ninja High School is a manga-inspired comic book series created, written, and illustrated by Ben Dunn, and currently published by Antarctic Press. While it was originally intended as a parodic mini-series, the comic became so popular that it became a full series, currently totalling over 160 issues and many miniseries and special issues. The annual specials Ninja High School Yearbook and Ninja High School Swimsuit Edition are entirely composed of art and stories created and contributed by fans.

The story centers on Jeremy Feeple, a student at Quagmire High, who soon encounters a beautiful female Ninja named Itchy Koo (real name Ichikun Ichinohei) and an Alien Princess named Asrial — who have both been ordered to marry him. The earlier stories focus on the girls' comedic attempts to marry this seemingly plain, ordinary high school boy. As the story progressed, backstories were given to the core characters, and an extensive supporting cast developed. While early stories focused mainly on slapstick, later story arcs have become more serious, delving into murder, drugs, and homosexuality.

The series contains Lawyer Friendly Cameos and Captain Ersatzes of characters from other media, usually but not always Japanese; these included Kamen Rider, Power Rangers/Super Sentai, Harry Potter, Superman, The Powerpuff Girls, Terminator, Ninja Gaiden, Transformers, Nadia: The Secret of Blue Water, Urusei Yatsura the Gundam series and especially Ranma ½ (seriously looking at the early chapters, you'd be forgiven for thinking this whole series was an out and out parody of it).

Ninja High School v2 was an attempted Spin-Off set after a Time Skip, revolving around Jeremy's thrill-seeking younger brother Ricky; it originally ran alongside the original series, but the new storyline was brought back into the main title though Ricky was now the main character.

Battlefield Press has launched a roleplaying game for the series, both in a proprietary D6 and the Savage Worlds system.

The series has been uploaded to Webtoon, including both the original run, Volume 2, Shidoshi, Quagmire USA and Volume 3 (Though no Hawaii series for some reason) as well as some of the crossovers with Gold Digger. You can Read it here

and here's a checklist for the links to certain parts of the series.

Mini-Series and One Shots