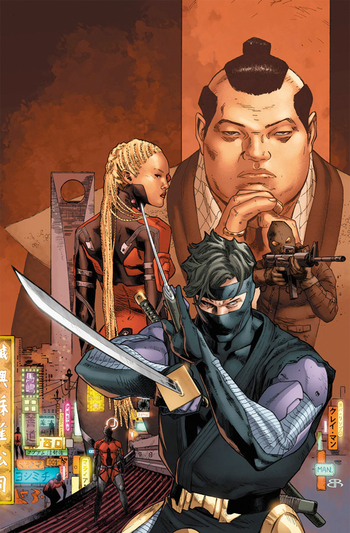 Ninjak, real name Colin King, is a Valiant Comics character created by Mark Moreti and Joe Quesada. First appearing in the pages of Bloodshot, he quickly became one of Valiant's most popular characters, landing his own series.

The premise is pretty simple: To most people, Colin King is a British billionaire playboy, heir to the great King estate and living without a care in the world. However, he lives a secret double life known only to a small handful of people. Armed with a lifetime's expertise in ninjutsu, an arsenal of custom-made gadgets, and, most importantly, his massive amount of money, he serves MI6 as Ninjak, the world's greatest superspy.

If that sounds like James Bond meets Batman, that's because it basically is. And it's as awesome as it sounds.

The Acclaim Comics era Ninjak, however, was a very different animal. In that series, Ninjak is no longer a ninja superspy, but a character in a video game. The main character of the series is a child who can transform into Ninjak by saying the character's catchphrase from the game.

In 2012, Ninjak began appearing in the rebooted Valiant Universe, this time first appearing as an (accidental) adversary to X-O Manowar. After appearing in several other comics, primarily as a main member of Unity, he once again regained his own series in 2015, written by Matt Kindt. The comic focuses on Ninjak's various adventures, primarily dealing with a mysterious cabal called the Shadow Seven. The series is particularly noteworthy for it's two-plot structure: the first story is the main plot, while the second is a sub-arc that provides further context.

The character is set to headline a digital web series titled Ninjak vs. the Valiant Universe.

The current (2012 on) Ninjak series contains the following: