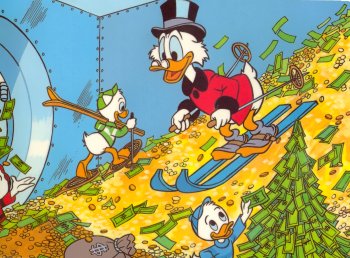 Fiction is loaded with Wish-Fulfillment, and being rich enough to bend reality is one of them. These are characters whose wealth is almost impossible to quantify. More Money Than God is the bare minimum.

Now this could happen in Real Life, like royalty who owned literally thousands of Pimped Out Dresses, or a man in India who built a private skyscraper for his family, staff, and fleet of cars, or Marcus Licinius Crassus, who had three times as much money as Bill Gates and personally funded the reconstruction of the Roman army. But in fiction, that's on the lower end of this scale.

Stuff that generally does not qualify you to be a member of the Fiction 500: Big Fancy House, Cool Chair, Cool Boat, Cool Plane, Cool Car, Battle Butler, Maid Corps, or even simply having assets in the billions.

Stuff that generally does qualify you to be a member of the Fiction 500:

Now personality doesn't really matter. You could be a Rich Bitch or Uncle Pennybags. You could be a law abiding citizen and even be Batman, or instead think you can screw the rules.

. And despite the name implying otherwise, there can be any number of characters here. Also, there is almost no way to objectively rank them, although Forbes tries with their "Fictional 15"

For real people who are considered the richest in the world, see The World's Billionaires

, an annual ranking made by Forbes (which has its own article

on The Other Wiki, BTW).

Of course Psalm 115:6 does say "The heavens belong to the Lord, but the earth he has given to mankind," but the preceding examples suggest this should be interpreted as "given as a tenancy" and not "given outright ownership of". See also the parable of the tenants reported in the gospels of Matthew (21:33-41), Mark (12:1-9) and Luke (20:9-16).