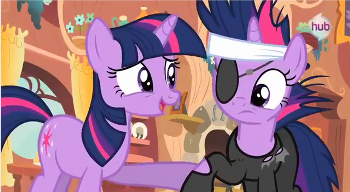 "Is there some sort of epic pony war in the distant future or something?"note Actually, she just looked at the sun through a telescope without proper safety precautions. She's also from next Tuesday.
Kevyn: The bolted patch looks very roguish.
Ennesby: I don't want "roguish", I want "depth perception".
— Schlock Mercenary
Advertisement:

A quick way to indicate that events during a Time Skip (or in the future) were not all hugs-n-puppies is to have one of your heroes return wearing an eyepatch.

The reasons a missing eye is used so consistently for this purpose (instead of, for example a missing limb or massive scarring), are:

To qualify for this trope, the eyepatch has to be unexplained when the reader/viewer first encounters it. Any explanation must come later. This is usually a sign that they Took a Level in Badass, and as such is a common accoutrement of a Future Badass.

Possibly caused by an Eye Scream.