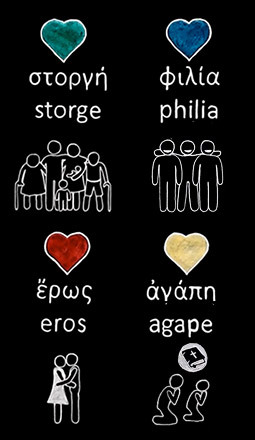 Love is the most important value of all. Everyone needs to love and be loved in return. This trope applies when a character's main motivation is to love, be loved or both.

Because the word "love" can apply in many situations and circumstances, the ancient Greeks divided the concept of love into four different types (later expanded upon by C. S. Lewis in his The Four Loves):

. Translated precisely as "guest friendship", we know it today as the Ancient Greek concept of Sacred Hospitality. It was so important to the Greeks that its patron was Zeus himself, in the epithet of Zeus Xenios.

Also referenced as a minor note are loves for non-human things. Love for an animal (such as a pet) is redirected to storge according to C. S. Lewis, while modern animal rights proponents might argue for the inclusion of animals in general in agape, but love for nature and love for country are most noted as love for non-human things. Likings and preferences (for food, activities, etc) are also discussed especially as you can admire an object (like a painting for instance) just as you can admire a person.

It is notable that these are rough categories of love and not exclusive to each other. That is, more than one can appear between the same people. For instance, if Alice meets Bob at a Sci-Fi convention and they continue to get together to talk about sci-fi, then they have philia. If Alice and Bob in the process become each others' Love Interests, they will also have eros, but if they still get together to talk about sci-fi they still have philia. If they are Happily Married for so long that they grow old together and like each other's company simply because they are there, that is storge. And if they make Heroic Sacrifices for each other, that is agape. In general, philia will normally make storge arise in time, and in the absence of hindrances (look here for a list) it's likely to bring about eros as well.

Related to Like Brother and Sister and I Just Want to Have Friends. Agape is also a Super-Trope of Heroic Sacrifice and all four (well five) can be expressed by an Act of True Love.

Frodo also has a strong storge bond with Bilbo, but unlike his relationships with the hobbits in the Fellowship, this one has philia overtones, as Bilbo got him interested in elves, cross-country tourism and ancient history.

Exploration of eros is the entire point of the Romance genre. The lighter, funnier shade of it will be explored in a Romantic Comedy. (Remember, Cupid's arrows fly blind!) Many works that are not, per se, romances, will have Romance Arcs, too.

Compounded moreso by Jesus having died for all people, even the ones who would reject Him. And He did this knowing full well most people would reject Him. That is why it is unconditional; He loves even the people that hate Him. Described beautifully (of course) by Lewis:
He died not for men, but for each man. If each man had been the only man made, He would have done no less.