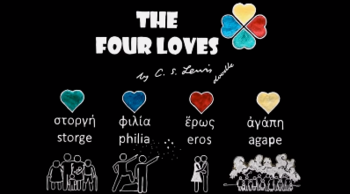 In Greek There Are Four Words For Love
"The only place outside Heaven where you can be perfectly safe from all the dangers and perturbations of love is Hell."
Advertisement:

The Four Loves is a nonfiction work by C. S. Lewis analyzing four types of love.