is a Friday Night Funkin' Game Mod by artcarrot 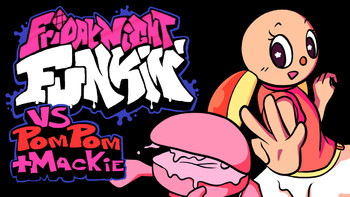 I swear I'll do better this time! note Pompom and her dog, Mackie, as featured in Week 2
Advertisement:

Cup Head OC Pompom. It has 2 weeks, each with its own opponent.

In Week 1, Boyfriend is desperate to have a proper date with Girlfriend without running into trouble as usual, so he takes her to the outskirts of town and into a nearby forest to finally have a proper date. Things are going well, until they run into a strange girl with sliced apples for pigtails. What is she doing here? And of course, she wants to challenge Boyfriend to a rap battle. Guess there's no other choice. Surely, she won't cause too much trouble. However, she does not seem to take lightly to losing so many times…

In Week 2, Boyfriend and Girlfriend run into Pompom's pet macaroon dog, Mackie. After the whole singing fiasco with his owner during Week 1, he decides to steal Pompom's mic and take matters into his own paws by challenging Boyfriend in a rap battle so that he can avenge his best friend. Who knew a dog would be so good at rapping?

Tropes in Vs. Pompom include....