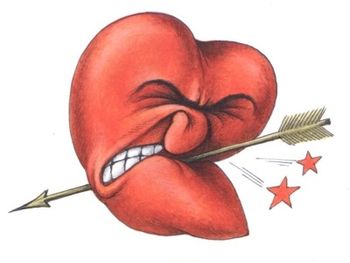 '', written by Boudleaux Bryant and recorded by The Everly Brothers, Nazareth, Cher, etc.

Forget life-threatening superheroism, acting Too Dumb to Live, and Tempting Fate. The dumbest, most insane and dangerous thing any hero can do in any media is... falling in love. Dare to love someone else and you set up yourself and your beloved for a plethora of emotional griefs. Love in Real Life is responsible for vast quantities of anguished poetry and tragic literature; factor in all the crazy stuff that happens on TV, and drama and disaster are practically guaranteed.

About to commit permanently? Look for an Anyone Can Die to put a permanent end to the Will They or Won't They? issue. Forget to say goodbye to your beloved that one time? It'll haunt you for the rest of your life. And let's not forget that becoming emotionally attached to one person leaves you open to the stress caused by the villain abducting your beloved or them even being killed off senselessly just to shape you into the Anti-Hero out for Revenge, or at the very least a Heartbroken Badass. Your love is hurt but alive? Don't You Dare Pity Me! — they will shove you away. Or perhaps you'd be their Second Love — if only they and you didn't think Silly Rabbit, Romance Is for Kids!. Love will make your heart go soft and pitter-pattering into the path to be crushed by the cruel forces of fate against Star-Crossed Lovers. Small wonder that so many try to protect their loved ones by dumping them.

If you've got more than one love interest, you've got a headache-inducing Love Triangle or even Love Dodecahedron on your hands. Tread these waters very carefully, lest you be on the receiving end of a Yandere's poisonous affections or a Tsundere's Megaton Punch. Pick one lover and you can look forward to either a Thundering Herd of jilted rivals or the silent shattering of many other hearts. All in the name of comedy, you say? Comedy never became as twisted as it does when dealing with lovers crazy enough to beat down your door, commit trespassing, glomp you, and refuse to let go. And remembering the love interest anywhere you go makes it worse. Could also result in the character being Not Good with Rejection.

And heaven forbid if your love turns out to be one-sided. You'll become a crazy Love Hungry psycho stalker if you don't choose to nobly sacrifice your love. Sometimes you'll even go all the way into a full-fledged villain with a grudge against humanity because humanity was not kind enough to let you have that one person. Sometimes it's even your own creator who decides that you can't get them because he couldn't get her in real life!

Such a fragile illusion... Isn't it?

In the right/wrong genre, even when you win, you lose. Little wonder why many a pessimist believes that Love Makes You Dumb, and many a hero has chosen to be a Celibate Hero.

Compare Destructive Romance, Hope Is Scary, The First Cut Is the Deepest, and Revenge Romance. A consequence when Love Redeems goes with Redemption Equals Death.

However, if you do manage to get it right, love can be the purest and most powerful thing in the world. Another way to resolve this is through Cleaning Up Romantic Loose Ends.

Contrast Happily Married. Unrelated to Lover Tug-of-War, even though that may also hurt.

Unable to confess her feelings for Kyosuke, Sayaka approaches before breaking down and crying in her shoulders, calling herself a zombie and gradually losing her confidence and self-esteem.

Unable to confess her feelings for Kyosuke, Sayaka approaches before breaking down and crying in her shoulders, calling herself a zombie and gradually losing her confidence and self-esteem.