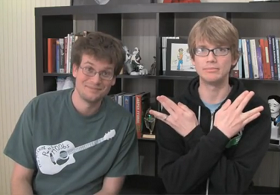 John and Hank Green: Epic Nerdfighters!
DFTBA!note Don't Forget To Be Awesome. Or, if John is sick of people asking what it means, it's Dinosaurs Fail To Beat Asteroids. It can also be a lot of other things.

(sometimes stylized as VlogBrothers or vlogbrothers), as the name implies, is the YouTube channel and vlogging project of brothers Hank and John Green.

Vlogbrothers was originally a one-year project starting on January 1, 2007 under the name Brotherhood 2.0. The project consisted of the two brothers swearing off textual communication with each other, only corresponding through video updates — one after the other, every weekday of the year, and no more than 4 minutes in length. After the year was up, the enthusiastic reception from the fanbase they had accrued — with the massive bump in traction they received from Hank's song "Accio Deathly Hallows" making YouTube's front page being no small factor — led them to continue uploading videos.

Since then, their fanbase has grown extensively, due not only to the success of their videos, but also music, books and various charity works. Fans are known as "nerdfighters"note derived from John misreading the name of an Aero Fighters arcade cabinet (nerds who fight, not people who fight nerds), and the collective subculture surrounding the fanbase has been dubbed "Nerdfighteria"

. They even have a Memetic Hand Gesture (two crossed-arm tucked-thumb Vulcan salutes), a motto ("Don't forget to be awesome", or "DFTBA"), and an ongoing mission: to fight "world suck" (generally unfavorable things in the world) through social activism.

They are the organizers of VidCon, the world's first and only convention dedicated to internet videos. Both now also host another channel Crash Course, where each brother gives lectures on subjects they're knowledgeable about, and Hank also hosts SciShow, filled with various science news videos. In addition, Hank produced The Lizzie Bennet Diaries and The Brain Scoop, a modern adaptation of Pride and Prejudice and a show about museum taxidermy, respectively. John and Hank are also hosts on the mental_floss YouTube channel

, from the magazine mental_floss which gave John his first ever writing job, on which once a week either John gives a nerdy triviatastic list video or Hank gives a quiz video.

The Vlog Brothers provide examples of:

Links are in the dooblydoo. Hank, I'll see you on Friday.