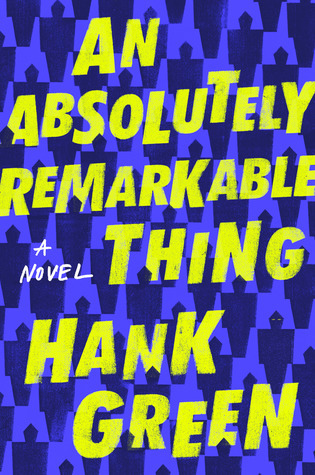 “You can only do so much pretending before you become the thing you're pretending to be.”
"Even on this most terrible days, even when the worst of us are all we can think of, I am proud to be a human."
—April May

An Absolutely Remarkable Thing is the 2018 debut novel of Hank Green, best known as one half of the VlogBrothers, as well as the younger brother of award-winning novelist John Green. A sequel, "A Beautifully Foolish Endeavour," was released in 2020.

The novel revolves around a twenty-three year old design graduate living in New York, named April May. When heading home from work at 3 AM, she stumbles across a colossal statue of a man in the middle of the city, with no sign as to how it got there. April calls her friend Andy, and they make a video with the statue, which April dubs "Carl", and upload it to YouTube.

Overnight, the video becomes a viral sensation as it turns out Carls have appeared not just in New York, but in cities all across the world - and they may not be of human origin. April is thrown into the media spotlight, somewhere it turns out she does not mind being, and becomes embroiled in a vicious culture war as to what the Carls' purpose on Earth is, and how humankind should respond to them.

The first chapter, narrated by the author, can be found here