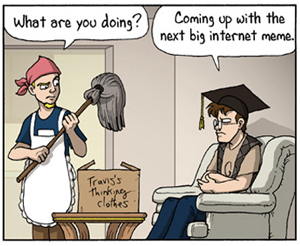 Forcing a Meme is the act of trying to intentionally raise the popularity of something to memetic status. It can involve mass repetition of a phrase or trying to convince someone else that it is already memetic.

Given the nature of the Internet, very few forced memes actually become accepted memes. People are naturally attracted to freedom and don't like being told what they should like. The few that do become accepted memes often do so only because people have made a meme about the meme, which means it's funny for a different reason than originally intended. That said, different people like different memes, and it's not uncommon for people to accuse a meme they don't like but see too often as being forced on them.

Compare AstroTurf, a supposed Viral Marketing campaign that's being engineered by the company itself. Contrast the Streisand Effect, when something turns memetic entirely because someone is trying very hard to remove it from the Internet.