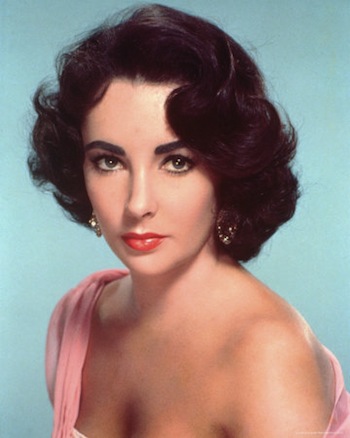 "Everything makes me nervous - except making films."
Advertisement:

She was born in London to American expatriates who moved back to the US in 1939. She started as a child actor in the 1940s, and became famous with movies like Lassie Come Home, National Velvet and Little Women. She made a successful transition to adult roles in Father of the Bride and A Place in the Sun. After a series of somewhat forgettable films, she appeared in Giant along with James Dean, then was nominated for an Academy Award for Best Actress four consecutive times for Raintree County, Cat on a Hot Tin Roof, Suddenly, Last Summer, and BUtterfield 8. She won for the latter, which was widely seen as a Consolation Award (even by Taylor herself).

In 1963, she appeared in the big-budget historical epic Cleopatra, for which she received a record-breaking $1 million. During production, she started a relationship with her co-star Richard Burton, which caused a huge scandal because they were both married at the time. Cleopatra went way over budget, and became the most expensive film ever made; despite being the highest-grossing movie in 1963, it still was considered a failure.

Taylor and Burton got married in 1964 and made several movies together. The most famous is Who's Afraid of Virginia Woolf?, for which Taylor won her second Oscar. Her performance in the film is widely regarded as the best of her career. In 1967, she and Burton starred in a film adaptation of The Taming of the Shrew. This was her last really memorable role. She and Burton divorced in 1974, remarried in 1975, and divorced again in 1976. After 1980, she largely switched to television. Her last theatrical film role was in The Flintstones in 1994; her final live-action role was in the Made-for-TV Movie These Old Broads in 2001.note Her very last role was a voice in God, the Devil and Bob later in 2001.

From the '80s, she devoted much time to AIDS-related charities after her friend and co-star Rock Hudson died of the disease. She also developed her own brand of fragrances which brought her more money than her acting career.

She was a close friend of fellow Former Child Star Michael Jackson in the latter half of his life. Her final wedding, to Fortensky, took place at Neverland Ranch.