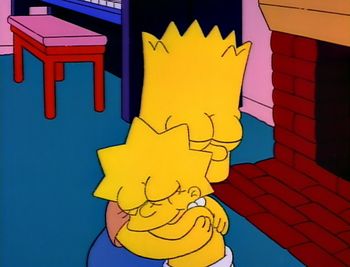 Aw, Look! They Really Do Love Each Other
Advertisement:

While waiting for Maggie to say her first word, Homer and Marge tell the story of their life after Bart was born (where they lived in an apartment in a neighborhood that looks like it was from the early 20th century rather than the mid-1980s), how Homer, Marge, and Bart moved into their current house, the early days of Bart and Lisa bonding, and Homer winning free meals from Krusty Burger's 1984 Olympics promotion due to a technicality.