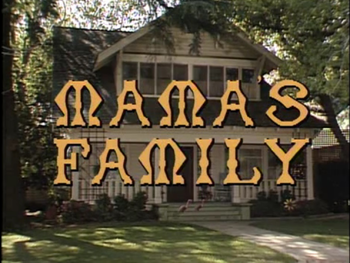 Mama's Family was a sitcom that aired on NBC from 1983–84 and then in first-run syndication from 1986–90. It was a spin-off of a recurring sketch on The Carol Burnett Show called "The Family", which had previously been adapted into the CBS TV movie Eunice in 1982.

By the time of the syndicated seasons, the cast was narrowed down considerably, keeping only Mama, Vinton, and Naomi (guest stars still reprised their roles, however). Also introduced were Thelma's fresh-out-of-juvie grandson Bubba (Allan Kayser) and nosy spinster neighbor Iola Boylan (Beverly Archer). This five-person cast would keep the show going for the rest of the show's run.

The show revolves around the family's lives and is an example of a Dom Com.