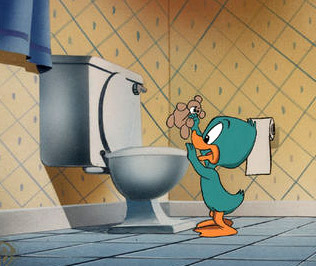 Water go down the Hole!
"Our oldest child has discovered the little silver handle on the back of the toilet. She's making more stuff disappear than David Copperfield! My wife's lost three combs, I lost my good sunglasses. We're pretty sure she's flushed the remote control, 'cause every time we go to the bathroom, the TV comes on!"
—Jeff Foxworthy
Advertisement:

Babies are naturally curious about a lot of things, and at some point or another, they'll want to know about the toilet. However, they won't really know what it does — at least not at first. They find more enjoyment in flushing stuff down the toilet, no doubt losing some of your precious possessions if it's within reach of the baby — or perhaps clogging it up and overflow... or both! This is Truth in Television for anyone taking care of a small child or baby.

However, several other scenarios can also happen from this as well, say, for example, a character decides to pull a plug in the earth, draining the ocean and turning it into a whirlpool. Other times, it may lead to strange worlds after getting sucked in.

Drug dealers will sometimes do this in the form of Flush the Evidence. Commonly found in a Toilet Training Plot. If flushing items (or yourself) down a toilet really does send them to another location, see Toilet Teleportation.

Do not confuse with Down the Drain, as it covers underwater sewer levels in Video Games. Also don't confuse with someone having fun causing Flushing Toilet, Screaming Shower.

I wanna flush it agaaaaaiiiiiiiin...