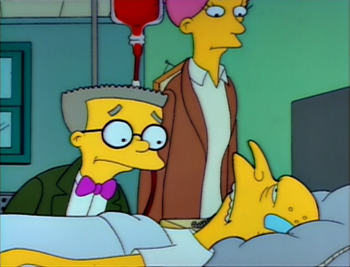 Mr. Burns is in dire need of a blood transfusion, and Bart is the only one who has the same rare blood type as Mr. Burns, so Homer forces Bart to donate under the impression that the family will get a buttload of cash for the generous deed. But when all they get is a "Thank you" card, Homer writes a strongly-worded letter — which Bart ends up sending after Marge talks Homer out of putting it in the mail.