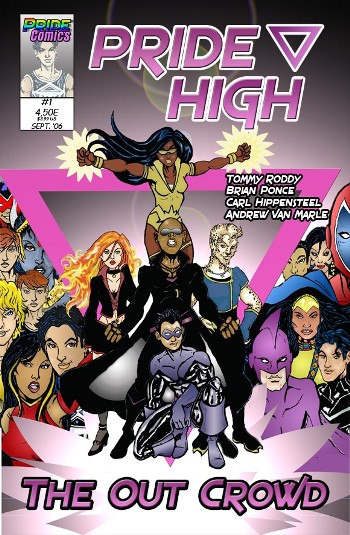 "It isn't easy starting a gay-straight alliance at a school for super-powered youth, but the Out Crowd isn't giving in!"
— series tagline
Advertisement:

is a comic book series written by Tommy Roddy and published by Pride Comics. It follows a gay/straight alliance at a superhero high school. The website also allows for readers to create their own characters on the message boards

, and these characters have a chance to appear on the comic (and one of them has even joined the core group of characters).

Within the story, Pride High is the titular gay/straight alliance, and they act as a squad for the school's Inter-Squad Championships (ISC), in which students sharing a unifying interest form a five-person squad and compete with other said squads throughout the year in academics and, more noticeably, physical stadium matches. The prime antagonist squad to Pride High is called the Argonauts, a group of primarily super-strong characters.

Aside from the ISC, there is also a prevailing mystery, as one of the Pride High members dies early on, and the squad investigates what he was doing that may have lead to his death.