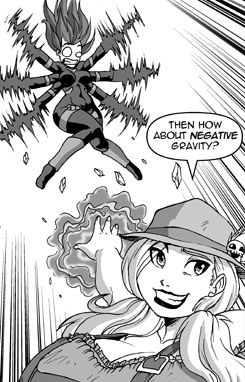 Going up!
Mecha Maid: Look out for her, she has her own gravity.
Spinnerette: That's just mean, Mecha Maid! Sure, her BMI is on the high side, but—
Mecha Maid: No, that's Greta Gravity! Her superpower is local control over gravity!
— Spinnerette
Advertisement:

The ability to control gravity as a superpower (or Applied Phlebotinum that serves the same purpose).

Such a power is often coupled with a large amount of leeway as to how gravity works, such as making gravity a force with an exact cut-off range, only working on a specific object, or the third law of motion being violated with only one object being attracted to another. This power is essentially telekinesis with different flavor textnote  In a gross understatement. The real difference is much more complicated.

, sometimes coupled with the ability to make things implode.

Note in Real Life, everything that has a mass will have their own gravity, but only sufficiently heavy objects (such as, say, planets and stars) can create powerful enough gravity force to have any discernible effect on other objects. Fictional gravity-users rarely have such issues.

Compare Magnetism Manipulation, a similar power; both it (electromagnetism, technically) and gravity are one of the four fundamental forces of the universe. Users of those are potentially among the most powerful of people. Compare also Power of the Void, which may encompass this. Artificial Gravity is when this is explicitly a technological feat. Control over gravity is one way a character may create a Corralling Vacuum.

Of note is that control of gravity is sometimes (especially in Japanese media) associated with control over darkness, letting the user create Black Holes. Expect plenty of Artistic License – Physics along the way. This character might also favor purple clothing, because that's the color gravity often is represented with. For marginally more realistic ways to use strong gravity fields, see Powered by a Black Hole.