Note: As the Fan Fic this page is about is still in progress, this trope page is currently under construction. Anypony who has read this fic should feel free to add any tropes we seem to have missed. 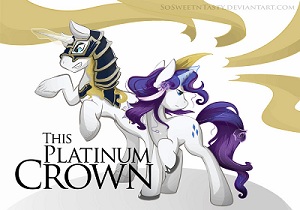 Only one can wear the crown...
After the time-looped events of The Best Night Ever, Rarity's relationship with Prince Blueblood seemed to be a fairy tale come true. Perhaps so, but it was a fairy tale soon cut short. Her dreams and future position quickly earn her the attention of powerful enemies. Only one mare can bear the Platinum Crown of the Duchy of Canterlot and be heiress to its secrets and magics. The future of Equestria may well depend on that one mare being Rarity the Unicorn.
Advertisement:

This My Little Pony: Friendship Is Magic Fan Fic provides examples of: