Heart Is an Awesome Power 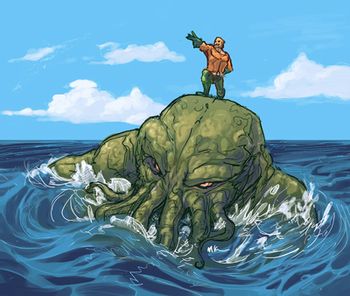 by mk01 on DeviantArt

Largo: Dude, I'm battlin' zombies and all I got is luv pow3r from a n3wb magical grrl. Help me out here.
Rent-a-Zilla Salesman: All ya got? That's enough, mate.
— Megatokyo
Advertisement:

The character decided to play the Superpower Lottery and ended up at the bottom of the superpower scale. In the world full of Reality Warpers and Elemental Powers, they won a heart. Lame, right?

Hey, Heart is an awesome power! Somehow they manage to Curb Stomp Nigh Invulnerable foes. Why?

Usually, a type of skill reapplication: the power has utilities which no one but the Weak, but Skilled hero recognizes. Occasionally the main power isn't the awesome part, it's the Required Secondary Powers needed to have it work in a remotely logical way.note For instance, an aquatic hero might seem useless out of water, but their superhuman swim speed, ability to withstand crushing ocean pressures, and ability to see and hear clearly in the murky depths means they possess heightened agility, strength, and senses (in addition to any other fishy powers they might possess like razor claws or bioelectricity), all of which can serve them just as well on dry land. Sometimes justified with the powers only becoming effective over time, or that they are only effective under certain conditions — however then they pay off handsomely.

Sometimes the character does not realize the usefulness of the skill until later, in which case it is a Chekhov's Skill. Might involve a Chekhov's Classroom on the lines of: "Sure, my only power is to control X... but you forget that Y is X too."

Might be An Aesop to make the most of what you have. Especially ironic if another character had, or could have had the same ability before, but decided that it was useless.

The video game version is usually a Lethal Joke Character, and sometimes Difficult, but Awesome. Sister Trope to Lethal Harmless Powers, where normally useful but inoffensive powers turn out to be able to really hurt others. See also the Inverse Law of Complexity to Power, which can be why these powers become useful. Semantic Superpowers often seem like this initially, before the implications of just how broadly they can be applied become clear.

Compare Magikarp Power, which truly is useless at first, but eventually ascends to extreme power through hard work and/or patience. Contrast Weaksauce Weakness and Logical Weakness, in which otherwise strong powers contain vulnerabilities that make their wielders not as effective as they might seem. Do not confuse this with Flight, Strength, Heart, where the character has a relatively useless power, and also an awesome power. If the power is truly useless outside the highly restrictive conditions of an Eigen Plot contrived to make it useful, then This Looks Like a Job for Aquaman. Gross-out powers can involve both this trope and Revolting Rescue.

Despite the name, this trope is not explicitly about The Heart or The Power of Love but that can happen.