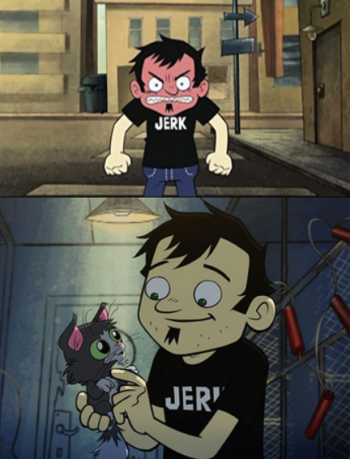 A person you would expect to be a big jerk has some redeeming qualities behind their tough demeanor. Occasionally, they'll try to make it a Hidden Heart of Gold.

Often this is Played for Laughs, but not always. They are just as common in drama, suspense, horror, and other genres as they are in comedy. One reason for this is that they make a convenient Plot Device. After all, the supposed jerk turning out to save the family from their real stalker, instead of being said stalker, can be a source of Heartwarming Moments when done right.

If he's a manly-man who pursues an unexpectedly delicate hobby, it may be a case of Real Men Wear Pink. Audiences may also sympathize more with the Jerk with a Heart of Gold if he's shown to frequently have a good reason to act angry or annoyed. Even the most patient of souls can only endure being the Only Sane Man when they're Surrounded by Idiots for so long, after all. One or two Pet the Dog moments scattered around for character depth do not grant a heart of gold. A true Jerk with a Heart of Gold has many Pet the Dog moments. Or maybe those moments are rare but powerful. Or maybe they skew more toward the "Jerk" part but start making a point of showing the "Heart of Gold" part following a Jerkass Realization. Either way, ultimately they manage to balance out the jerk in them. If it doesn't balance out, they're just a regular Jerkass a Jerk with a Heart of Jerk.

Compare/contrast with Hidden Heart of Gold, Bitch in Sheep's Clothing, Noble Demon, Bruiser with a Soft Center, Hero with an F in Good, Innocently Insensitive, Aw, Look! They Really Do Love Each Other, Sour Outside, Sad Inside, and Hitman with a Heart. Sometimes subverted as Jerk with a Heart of Jerk. The Lovable Alpha Bitch can also overlap with female examples of this trope.

Sometimes Truth in Television, though you can expect Real Life examples of this to be far more subtle than fictional ones. Most of the jerks you'll meet in your life will have some redeeming qualities to them. Few people are such jerks that they don't care about anyone, and cynical people tend to handle bad situations better, so having one as a friend can be useful when things go downhill. Given that this would still call Real Life people jerks, please do not add real life examples.

See, this page is just a big ol' softie deep down.
Feedback