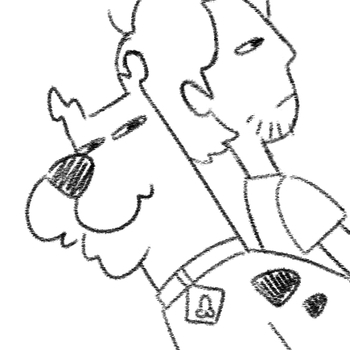 "Hey, is that a gun?"
Advertisement:

is a Fan Webcomic about the adventures of Scooby-Doo and Shaggy Rogers.

Okay, that's the simple explanation. The longer explanation involves the titular characters, except Scooby has a gun. Things go downhill from there, in weird, funny, and horrifying ways.

What began as a simple gag-a-day comic quickly developed into a much more complex story about betrayal, identity and planets-spanning conflicts that defies easy categorization. Described by the author as both comedy and horror, the story of Scoob and Shag could perhaps best be understood as classic cartoons meets JoJo's Bizarre Adventure.

Updates are currently weekly. The creator also has a tumblr where they post comics and answer questions, which can be found here

For works with similar premises, see Tails Gets Trolled, Weapon Brown and Breakfast of the Gods.

Scoob and Shag contains examples of: