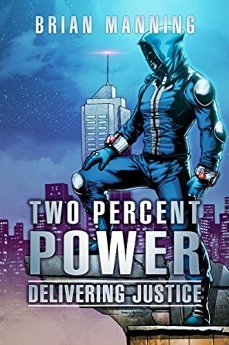 Two Percent Power: Delivering Justice by Brian Manning is the first book of a proposed trilogy following Patrick Akiyama, a young man with the power to telekinetically control milk as he seeks to become a superhero. With the help of his overly eager friend, Trevor, and a number of other superpowered young adults, he patrols the city, fighting crime. Unfortunately for him, local crime boss Sight and his Visionaries have a master plan...

The sequel, Spilled Milk, came out November 1st, 2016, and features Patrick and his crew dealing with a new threat, a former tag team duo turned social justice vigilantes. Meanwhile, the authorities want to regain their position as the sole form of law enforcement in town...

The third, and final, book in the series, Expiration Date, was released on September 7, 2019, and follows the heroes trying to regroup against the Brotherhood of Armageddon with the help of recently FBI agents.