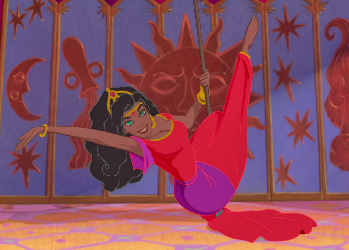 Frollo: "Look at that disgusting display!"
Phoebus: "Yes, sir!"
"It's a show that the kids can enjoy because of the cartoony action, and Dad can enjoy because he's a big ol' pervert!"
— Lore Sjöberg, The Book of Ratings on Superfriends
Advertisement:

Parent Service is where an all-ages work throws in a bit of mild sexiness to provide extra entertainment for parents and older siblings. Writers know that moms/dads adore watching shows with hot men/women in them, so they throw it in, in case they have to watch it. It's also what separates family shows/movies from children's shows/movies: While in both cases kids are the primary target, the former is specifically designed to retain elements that will keep all members of the family entertained.