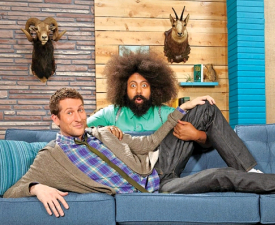 Block Rockerman and band leader Reggie
Comedy Bang! Bang! is a comedy series based on the podcast of the same name (formerly Comedy Death Ray Radio) hosted by Scott Aukerman and supplied with music by a succession of co-hosts/bandleaders (originally Reggie Watts, who left midway through Season 4 to serve as bandleader for The Late Late Show; he was replaced by Kid Cudi, who in turn was replaced by "Weird Al" Yankovic for the fifth and final season). The show is largely a satire/deconstruction of late-night talk show tropes and television in general, featuring surreal interviews with real celebrities as well as fake ones (the latter often portrayed by Aukerman's fellow Mr. Show alumnus Paul F. Tompkins), framed by all manner of wacky subplots.