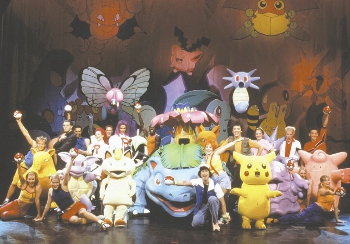 How did Pikachu get taller than Ash?
Advertisement:

Pokémon Live! is, in simple words, The Musical stage show based on Pokémon: The Original Series. It ran late in 2000 and is one of the first Pokémon-based productions made entirely in America. It's not canonical to the anime it's based on, but the story does fit the bill of a Musical Episode. The soundtrack was made of songs from the Image Song album Pokémon 2.B.A. Master, a few songs from the later album Totally Pokémon, and some exclusive musical numbers not heard anywhere else.

The story begins with a mysterious Gym Leader challenging all trainers to battle him for his one-of-a-kind Gym Badge, the Diamond Badge. Ash Ketchum, protagonist of the anime, is determined to win this Badge with the help of his Pikachu. However, he is also put through a dilemma of sorts; his friend Misty is upset that he never made good on his promise to take her to the movies for her birthday three weeks ago, which she points out is an example of him focusing so much on his Pokémon training that he is ignoring his friends.

What Ash doesn't realize, though, is that the mysterious Gym Leader is in fact Giovanni, leader of Team Rocket. He has been using the Diamond Badge as bait to make trainers unwittingly come face his new super-robot Pokémon, MechaMew2, based off of the powerful Mewtwo he used to own. MechaMew2's ability is that it can learn, amplify, and return the attacks of its challengers, thus making it unstoppable. By a strange coincidence, the only two techniques it hasn't yet learned are Thundershock and Thunder, two abilities possessed by Ash's Pikachu. Giovanni once again sends his Terrible Trio, Jessie, James, and Meowth, to capture Pikachu, which, surprisingly, they actually manage to accomplish. During this, he also kidnaps Professor Oak and Ash's mom, Delia, and the latter has a secret past with Giovanni that she's hidden from her son.

If you'd like to know how it ends, you can watch the whole thing on YouTube via the show's production manager starting here

for the entire show in one video. The shorter Dubai version can be seen here

, and the Spanish production can be seen here

The script can be found here

, the latter being a fan transcription. A Making Of Featurette can be seen here

, and an interview with the show's writer can be found here

Not to be confused with Pokémon: The Mew-sical, a fan production.