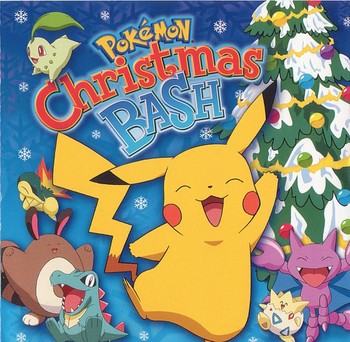 "We wish you a Marill Christmas and a Hoppip New Year!"
Advertisement:

Pokémon Christmas Bash is a Pokémon: The Original Series music album released around Christmas 2001. It's an album produced by 4Kids Entertainment and featuring various Christmas-themed songs using the English cast of the anime.

The ten songs are: "Pokémon Christmas Bash", "I'm Giving Santa A Pikachu For Christmas", "Winter is the Coolest Time of Year", "I Keep My Home In My Heart", "The Christmas Song", "Under The Mistletoe", "Must Be Santa", "The Night Before Christmas", and "Christmas Medley".