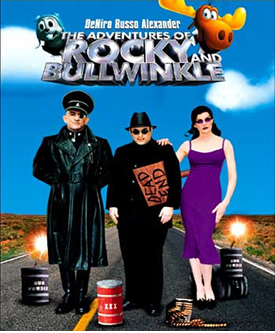 Walking away with the movie right from under the title characters' eyes.
"In a world full of cartoon characters and action figures you loved, spend more time with these human characters you don't, like Keno, an obnoxious little twerp, this boring science guy, and this completely random lady who calls herself April O'Neil."
— Honest Trailers - Teenage Mutant Ninja Turtles 2: The Secret of the Ooze

So a Live-Action Adaptation of your favorite childhood Funny Animal cartoon is coming out. You go to see it, and... what's this? Who's this guy? Where's the cartoon character? Why should we care about this guy? Can you move it along and get to the cartoon character now? Oh, there he is! And now they're back to that guy again. Looks like it's gonna be another Human-Focused Adaptation.

Family movies that are live-action (and sometimes even animated) adaptations of cartoons that otherwise probably wouldn't work as a live-action blockbuster, or actually would, normally seem to focus more on a newer human character and his love life, rather than the character from the series the movie is adapting. More often than not, the plot has an Unlucky Everydude with a crappy job and a crush on his hot co-worker, having a run-in with the cartoon character of the day, or having said cartoon character as a pet. Hilarity Ensues, and the cartoon character's hijinks somehow bring Everydude and his love interest together, and they live Happily Ever After.

These subplots mostly, if not always, seem to do with the unlucky new guy in love. This even applies to already existing human characters who never had a love interest, and are either given a completely new one, or they take an existing character and pair them up, accuracy be damned.

This is probably caused by a combination of the costs (both time and money) of CGI and the beliefs that a human character might be more relatable or that people want to see a love story—no matter how much it has to be shoehorned in. This trope, while common to live-action, is not exclusively a live-action trope. There are many examples within anime, comics, and Western animation itself. If any adaptation reduces the importance of major non-human characters to focus on more humanistic or traditional characters, it should count as being this trope, regardless of the medium. Note that this doesn't always mean "non-human characters are barely in it" but that the ratio is shifted considerably. The amount of human importance may shift from 10% original to 60% adaptation, it still leaves 40% of the movie to the non-human characters. It isn't always about "making it relatable" but being a Pragmatic Adaptation if you are going to make something in a different medium.

Examples by Medium Adapted Into: