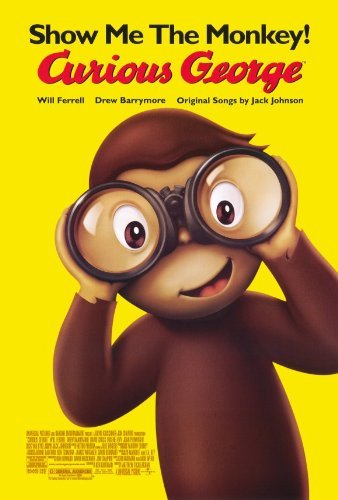 Get ready for some serious monkey business!
Curious George is a 2006 animated film based on the Curious George children's books.
Advertisement:

Curious George starts with a mischievous monkey playing in a jungle in Africa. The film then cuts to Ted, a man who works at Bloomsberry Museum. Unfortunately the museum doesn't get many visitors, besides a teacher named Maggie Dunlop and her class. The museum is due to be closed because it doesn't make enough revenue. The museum owner's son, Junior Bloomsberry, wants to replace the museum with a parking garage. Ted is convinced to go on a quest in Africa to bring back the "Lost Shrine of Zagawa" in the hopes of attracting customers. Ted finds the idol, however it turns out to be three inches tall, not forty feet tall like rumors stated. While in Africa Ted finds the little monkey. The monkey bonds with Ted and ends up following him back home, where their adventures together kick off.

Curious George and its sequels provide examples of:

Ivan the doorman can smell whenever there is a (unwanted) pet.

Ivan the doorman can smell whenever there is a (unwanted) pet.